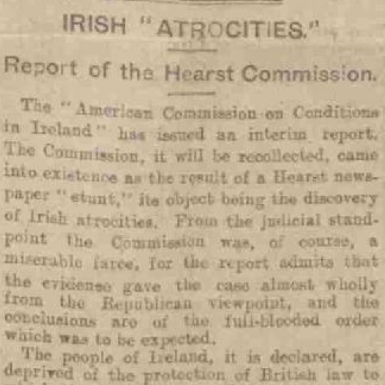 The events of the War of Independence were followed closely in America, due to the large Irish diaspora community. During the winter of 1920–21 the American Commission on Conditions in Ireland was established to gather testimonies from eyewitnesses on the state of the country as a result of the war. The interim report, released in the US at the end of March 1921, was based on the testimonies of 38 witnesses and painted a grim picture of the conflict. It accused the British government of ‘a campaign for the destruction of the means of existence of the Irish people’. The report’s findings were disputed by the British government and Unionists, who argued that the witnesses for the report were overwhelmingly from republican backgrounds. This summary of the report, published in the Northern Whig, appeared sceptical about some of the commission's statements.

The ‘American Commission on Conditions in Ireland’ has issued an interim report. The Commission, it will be recollected, came into existence as the result of a Hearst newspaper ‘stunt’, its objects being the discovery of Irish atrocities. From the judicial standpoint the Commission was, of course, a miserable farce, for the report admits that the evidence gave the case almost wholly from Republican viewpoint, and the conclusions are of the full-blooded order which was to be expected.

The report declares that the evidence seems to prove that the Imperial British Government has created and introduced into Ireland a force of at least 75,000 men, many of them youthful and inexperienced, and some of them convicts and has incited that force to unbridled violence. The Imperial British forces in Ireland have indiscriminately killed innocent men, women, and children; have discriminately assassinated persons suspected of being Republicans; have tortured and shot prisoners while in custody, adopting the subterfuges of ‘refusal to halt’ and ‘attempting to escape’; and have attributed to alleged ‘Sinn Féin extremists’ the British assassination of prominent Irish Republicans.

House-burning and wanton destruction of villages and cities by Imperial British forces have been ordered by officials of the British Government; and elaborate provision by gasoline sprays and bombs has been made in a number of instances for systematic incendiarism as part of a plan of terrorism. […]

The British Embassy has issued a statement declaring that the report of the American Commission on the Conditions in Ireland is ‘biased and wholly misleading’ and declares that Ireland is far from being a devastated country and is a most prosperous part of the United Kingdom. The report laid stress on the so-called reprisals, but ignored the Sinn Féin murders and burnings. The Embassy denies that a British Government order condoned unjustified violence.