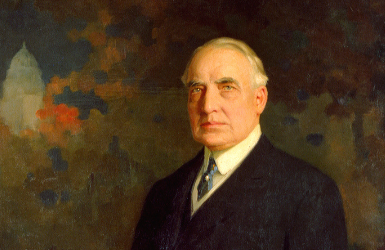 The election of Republican Warren G. Harding as President of the United States in November 1920 was met with mixed feelings among supporters of Irish independence. Harding was elected on a platform of ‘Americanism’ – his inauguration speech, carried in the Belfast News-Letter, pledged that the United States would not get involved in world affairs. While running for president, he declared repeatedly that the ‘Irish question’ was a domestic matter for Great Britain.

The President in his speech dealt frankly with America’s attitude towards European affairs.

The recorded progress of our Republic materially and spiritually in itself proves the wisdom of the inherited policy of non-involvement in old world affairs. Confident of our ability to work out our own destiny and jealously guarding our right to do so, we seek no part in directing the destinies of the old world. We do not mean to be entangled, we will accept no responsibility except as our own conscience and judgment in each instance may determine. …

We have no thought to impede the paths to closer relationship. We wish to promote understanding. We want to do our part in making offensive warfare so hateful that governments and peoples who resort to it must prove the righteousness of their cause or stand as outlaws before the bar of civilisation. We are ready to associate ourselves with the nations of the world, great and small, for conference, for counsel, to seek the expressed views of world opinion, to recommend a way to approximate disarmament, and to relieve the crushing burdens of military and naval establishments.