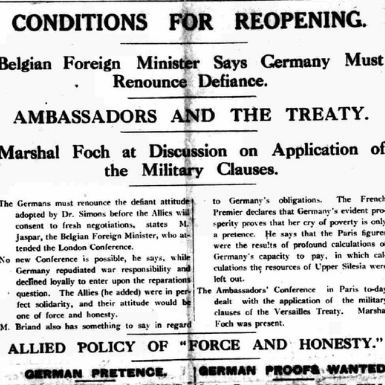 The political changes on the island of Ireland in the 1920s took place against a backdrop of wider upheaval in Europe, following the end of the First World War. One ongoing issue was the amount of war reparations Germany should have to pay. The Allies identified Germany as the sole guilty party for the war and demanded it pay billions in reparations. The Allies also refused to reopen negotiations until Germany accepted sole responsibility for the war.

The Germans must renounce the defiant attitude adopted by Dr Simons before the Allies will consent to fresh negotiations, states M. Jaspar, the Belgian Foreign Minister, who attended the London Conference.

No new Conference is possible, he says, while Germany repudiated war responsibility and declined loyally to enter upon the reparations question. The Allies (he added) were in perfect solidarity, and their attitude would be one of force and honesty.

M. Briand also has something to say in regard to Germany’s obligations. The French Premier declares that Germany’s evident prosperity proves that her cry of poverty is only a pretence. He says that the Paris figures were the results of profound calculations of Germany’s capacity to pay, in which calculations the resources of upper Silesia were left out.

The Ambassadors’ Conference in Paris today dealt with the application of the military clauses of the Versailles Treaty. Marshal Foch was present.