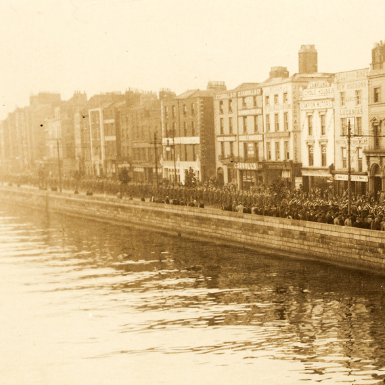 In July 1921, the Dublin Evening Telegraph looked at the differences north and south Dublin, investigating the attitudes, prejudices and stereotypes of those who lived on either side of the Liffey. It concluded by asking ‘where does the truth of it all lie?’

The Two Dublins. Differences Between the North and South Side of the City. Dislikes, Prejudices & Antipathies

It is a curious fact that in nearly all large cities there grow up in course of time likes and dislikes, prejudices and antipathies, between district and district …

It is a serious question this, too, in Dublin, where the Liffey divides the metropolis into two peoples who look at each other askance.

The floating population is not included in this description—only the genuine residents who never cross the river except in business.

The Liffey is, in fact, a real divider. It has succeeded in delimiting the city into two classes who are rarely, if ever, complimentary to each other.

It is a long-standing feud. A guess at its origin may be hazarded. At one time, not so very long ago, the North city was a fashionable quarter. Streets now the very reverse of “tony,” like Marlborough street, Gloucester street, Gardiner street, Cumberland street, Summerhill, Buckingham street, Mountjoy square, Bolton street, Dominick street, were very high up in the world. In that big centre aristocrats dwelt—dukes, earls, viscounts, lords of all degrees: leaders in the professions in the law, medicine, painting, music, architecture, their names are legion.

Then came a twist in the cycle of events. They all emigrated across Sweet Anna Liffey and never returned to their ancient haunts. There may be a touch of jealousy and resentment on the one side, a touch of snobbishness on the other.

What the North Says

At any rate anyone well acquainted with Dublin knows quite well what the North side thinks of the South and vice versa.

“Look at the young men across the Liffey,” says our true blue Northsider. “He is just a johnny. He can’t go out if his trousers are not properly creased. He wears ridiculously decorated stockings and shoes, or else tony boots with spats. He is a venomous cigarette smoker. When he hasn’t the cigarette in his mouth he is trying to swallow the nob of his cane.

“His tie is the very latest. He likes an eye-glass, which he does not require. It is difficult to say how he knocks out a living, for he is always in Grafton Street trying to catch the admiring glances of flappers. He probably lives on parents who believe he was born for something better than work …