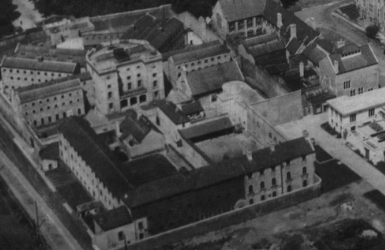 Cork County Gaol was one of several prisons used to hold republicans during the War of Independence. In March 1921 a daring attempt was made by IRA forces to free several prisoners who had been involved in the Clonmult Ambush in February that year. The attempt failed, and two of the prisoners were later executed at Cork military barracks in April.

An hour before Curfew on Wednesday night a desperate attempt was made by a party of Sinn Féiners to rescue the prisoners under sentence of death and others charged with various political offences in Cork Gaol. The fact that it was unsuccessful was due to no lack of effort on the part of the would-be rescuers, who made their preparations on a most elaborate scale.

At 7.30 six armed rebels entered College Road Post Office, and imprisoned Mrs Stack, the postmistress, and the members of her staff in a room of the house, and at once dismantled the telephone apparatus. The terror of these people may be imagined, but it was intensified some time later when armed men drew cordons across all roads passing the gaol, and collected the people passing along on their way home into groups, and held them for an hour at the point of the revolver.

There are three prisoners sentenced to be shot on Saturday morning for participation in the Clonmult ambush, and it is believed that their rescue from captivity was the chief objective of the operations of the IRA. … The prison is a huge building, covering nearly four acres, enclosed by walls 40 feet high, fronting the Western Road, with its rear extending to College Road, and its western gable abutting on Gaol Walk.

Suddenly parties of Sinn Féiners, brandishing revolvers, took possession of all the highways in the vicinity of the gaol, and held up all traffic, causing much suffering and inconvenience to civilians on their way to and from the western suburbs. A short time before the commencement of the Curfew the armed men who held up College Road Post Office brought about a hundred men, women, and children passing at the time into the building, and packed them into all parts of the premises, ordering them to instantly lie flat on the floor when the firing commenced. The terrible significance of this direction may be gauged by the fact that a strong military guard was posted along the wall of the gaol opposite the Post Office with machine guns.

When the operations began a band of armed men collected over one hundred men, women, and children, including professors of University College, magistrates, and others, outside the bank and the College gate in a position which was sheltered from the fire of the gaol batteries at this point, and at the Post Office.

The impression at the time held by most people was that an ambush was being prepared for the Curfew lorries. Many women in a collapsed state made piteous appeals to their armed guard to allow them to proceed on their way, but they were inexorable, as they knew what might happen at any moment.

A large ladder was brought by the attackers and placed in a position against the south-western corner of the gaol wall. Armed civilians were observed to mount it and throw a rope ladder into the exercise yard of the prison, and hurriedly descend to avoid the attention of the military guard on the wall.

The custom of the prison permits of political prisoners exercise in the yard remaining out until Curfew under the supervision of a warder, but the chance of a prisoner escaping is practically nil owing to the fact that all guards have been reinforced on all the ramparts of the prison. The prisoners were on the qui vive, and as the rope ladders fell into the exercise ground they made a desperate dash for liberty, led by Burke, of Tipperary, an ex-hunger-striker prisoner. But the prisoners were over-powered by the guard before they had got many paces, and the rope ladders thrown over to them are now in the possession of the prison authorities.

Burke … was instantly removed to his call and the attempt to break the gaol collapsed. The republican forces did not attempt to enter the gaol, although they had several scaling ladders in readiness. They retired as rapidly as they came.