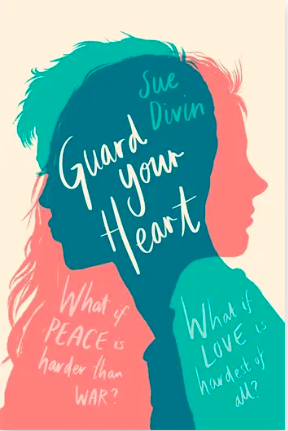 The story is a gritty, fast-paced, contemporary Romeo and Juliet, set in Derry 2016 and is pitched at adults and teens. Aidan and Iona, 18, are both born on the date of the Northern Ireland peace deal in 1998. They’re from very different communities. When Aidan falls victim to a hate crime, their paths cross. There’s a spark… and so what? It’s not the Troubles… but what if peace is harder than war?

The novel, which was joint winner of the IWC Irish Novel Fair in 2019, has received critical acclaim, described by The Guardian as ‘Profoundly powerful, subtle and effective.’ The Irish press has described it as ‘Outstanding’ (Irish Examiner), ‘Compelling’ (Irish Times) and ‘A deeply affecting, powerful book’ (Irish Independent).

‘The book is not about the Troubles,’ says Sue, ‘it’s about their legacy on the next generation. For over fifteen years I’ve worked in peace and reconciliation. In 2016 much of the peacebuilding focus was on what we term the ‘Decade of Centenaries.’ Ireland from 1912 – 1922 went through a period of turbulence and violence – politics and power struggles between those fighting for independence from Britain and those fighting to remain part of the UK. 2016 was the centenary of the Battle of the Somme in WW1 and the Easter Rising. In the Community Relations field I work in, people were asking how we could explore history in a way which also remembered our future. Home after work each evening, my brain was asking who is telling today’s story?Aidan and Iona and Guard Your Heart were birthed out of that process. I wanted to tell the story of two teenagers, both born on the day of the Good Friday peace deal who had never lived a single day during The Troubles. I wanted to write the legacy of the Troubles and the complexity of peace.’

Key lines in the novel, capture today’s issues. ‘The attitudes hadn’t changed, just the tools. We fought with culture now, not guns.’ Iona. ‘Were we building peace only knowing half the war story? In our charity-shop jigsaws as kids, there’d always been pieces missing, we never got the whole picture. Key bits were brushed under someone else’s carpet.’ Aidan

Fittingly, the book was published in the year of the centenary of the partition of Ireland and the creation of Northern Ireland. ‘From workshops with schools, teens, women’s groups, book groups and church groups, the novel has proved an inviting and safe way to discuss legacy issues,’ says Sue. Readers often comment that the story and characters capture them in a fast read, paced with dry Derry humour as well as triggering empathy.