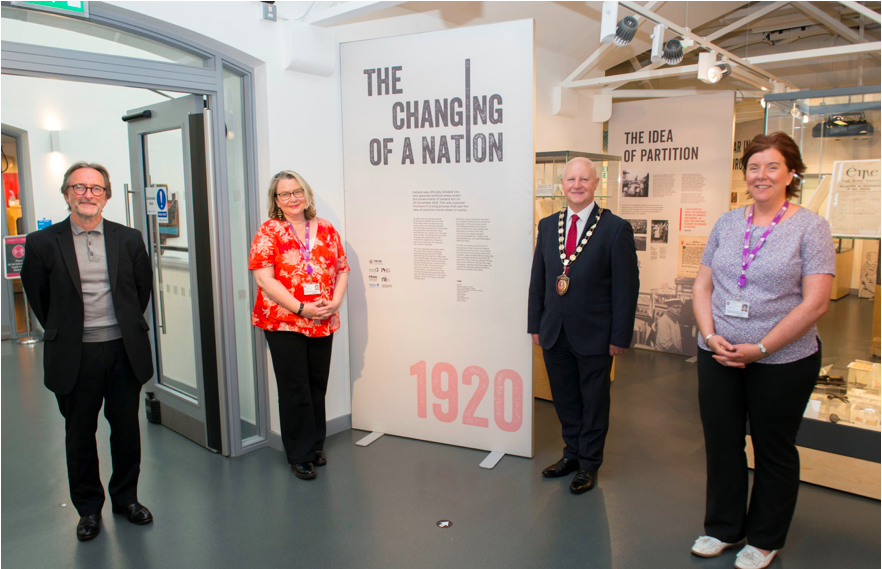 The changes on the island of Ireland in 1921 as a consequence of the Government of Ireland Act 1920, was a reflection of a tumultuous period which saw great political and social changes taking place not only at home but also across Europe, coming as it did so soon after the end of the first world war.

“The Changing of a Nation” exhibition explores some of these events of 100 years ago through objects, photographs and documents from the time and Fermanagh and Omagh District Council is delighted to be afforded the opportunity to host the event in the wonderful surroundings of Fermanagh County Museum at Enniskillen Castle.

The major touring exhibition has been organised by the Tower Museum, Derry City & Strabane District Council. It is part of the Understanding the Decade of Commemorations project, supported by the European Union’s PEACE IV Programme, managed by the Special EU Programmes Body (SEUPB). The project is match-funded by the Executive Office in Northern Ireland and the Department of Rural and Community Development in Ireland.

“The Tower Museum staff were delighted that Fermanagh County Museum was interested in borrowing the touring exhibition which also includes some objects and archives from the collections.  It was an exhibition that enabled us to work with a variety of partners including the Nerve Centre to engage the local community.”

Fermanagh & Omagh District Council's NI2021 Programme has been funded through the Shared History Fund, which The National Lottery Heritage Fund is distributing on behalf of the Northern Ireland Office.