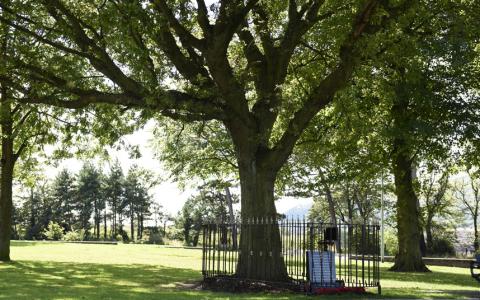 The Peace Tree at Woodvale Park, west Belfast, was planted on Empire Day, 1919, to honour the local people who lost their lives during the First World War.

Primarily a tree of remembrance and peace, the oak tree became an important focal point for veterans many years after the war, before seemingly being forgotten for almost 50 years.

The tree was rediscovered on the 90th anniversary of the Battle of the Somme in 2006, and was reinvigorated back into the community.

A railing, put in place by Belfast City Council, now surrounds and protects this significant oak. And with the newly commissioned European War Memorial now adjacent, community and visitor interest has flourished extensively.

The Peace Tree became Northern Ireland's Tree of the Year in 2015, after beating off stiff competition from five competing specimens including the Dark Hedges - best known for their starring role in the hit fantasy drama Game of Thrones - which took third place.

Patrick Cregg MBE, director of the Woodland Trust, said 'The enthusiasm of those who nominated trees, together with the number of votes, is truly heartening.'

He hopes 'people will give [the Peace Tree] the backing it deserves' in its bid to become European Tree of the Year.

Cast your vote for the Woodvale Peace Tree here.