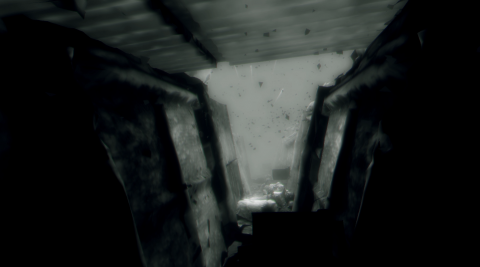 A new virtual reality film from BBC Northern Ireland which offers a first-hand experience of life in the trenches during the Battle of the Somme will this week be installed in the Creative Centenaries #MakingHistory 1916 Exhibition at the Ulster Museum.

‘Ghosts of Thiepval’ is an immersive virtual reality world that recreates life in the trenches at Thiepval Wood ahead of the Somme offensive in July 1916 that involved thousands of Ulster men. The film has been created by Belfast based Enter Yes studio in partnership with BBC Northern Ireland.

The film places viewers in the heart of the trenches ahead of the First World War battle and weaves a way through the front lines, accompanied by the voices and stories of soldiers who took part in the fighting.

A 2D version of the film will be installed in the Creative Centenaries #MakingHistory 1916 exhibition this week. Visitors will also be able to take part in a special Virtual Reality workshop, as well as viewing the virtual reality film on Oculus Rift headsets in the exhibition space, on Saturday 18 June and Friday 22 and Saturday 23 July.

David Lewis, Director of Communications and Digital Content at Nerve Centre, said: “#MakingHistory 1916 is a major interactive exhibition bringing together music, art, illustration, early animations and never-seen-before archive material to highlight how ordinary people, both at home and on the front line, helped shape history. We’re excited to add this fantastic piece of digital creativity from the BBC, giving visitors a new way of looking at and exploring the Battle of the Somme.”

Warren Bell, Digital Producer at BBC Northern Ireland, said: “We think that Ghosts of Thiepval is an incredibly visceral and emotive experience and hope that its ability to mix real locations with real voices will really engage audiences.”