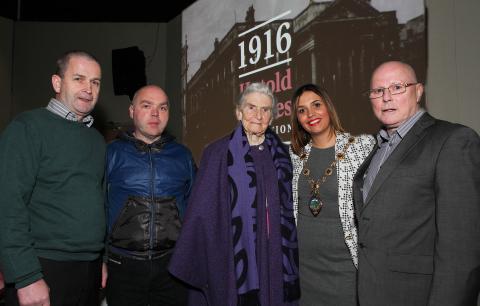 A new exhibition has launched at the Tower Museum in Derry~Londonderry, exploring local connections to the events of 1916.

Untold Stories has been developed by the Tower Museum and the Nerve Centre's Creaive Centenaries project. The event was also used as to launch a full programme of fascinating events highlighting some of the most significant historical moments of the era, and a dedicated schools programme.

The unique exhibition will reveal some of the fascinating untold stories of the time, through exhibits and a new film capturing some of the personal accounts of local families about relatives living through the era.

A series of special events are planned over the coming months focusing on a variety of themes from the time led by some of the most respected local historians, authors and academics.

Mayor of Derry City and Strabane District, Councillor Elisha McCallion, said she looked forward to finding out more about such a significant period in local history.

'I think that while people are obviously aware of the seismic shift in the political and historical landscape which came about as a result of both the Easter Rising and the First World War, less is known about the impact on our own city.

Education Officer with Derry City and Strabane District Council, Margaret Edwards, said she was delighted to see so many local people and historians contributing to the programme.

'1916 was such a significant year in terms of both the conflict taking place at home and abroad, and the programme seeks to give a more in depth insight into local events.

'We are delighted to be working with the Nerve Centre and welcome the many prestigious speakers who are taking part in our event programme, taking a comprehensive look at how these events touched the lives of individuals on both sides of the political divide. Drawing on a range of historical sources - from personal accounts to poetry and theatrical production - this series will offer some new perspectives on one of the most momentous years in modern history.'

The Heritage Lottery Fund (HLF) has provided funding for the Creative Centenaries project which is a wide ranging cultural heritage programme around the Decade of Anniversaries, led by the Nerve Centre. The programme aims to bring together a partnership of heritage and cultural organisations to celebrate our shared differences and explore our past together.

Paul Mullan, Head of HLF NI said: 'The Creative Centenaries project has been working across NI promoting and coordinating activity linked to this turbulent period of local history.

'We are delighted to see this latest collaboration with the Tower Museum. The comprehensive range of activities will help people to explore and learn about the complex period of 1916. It is thanks to National Lottery players that we can support these fascinating projects.'

The exhibition will be followed on April 21 with a talk by Catherine Morris on the Life of Alice Milligan, and the launch of new graphic novel produced by the Nerve Centre on the influential poets Alice Milligan and Francis Ledwidge.

Following this April 27 sees a special talk by Adrian Grant focusing on Republicanism in Derry and what life was like in the North West in 1916, before, during, and after the Easter Rising.

On May 4th Emmet O’Connor will explore Labour in Derry, 1889 – 1923: Portraits of James McCarron and Peadar O’Donnell, examining the era between1889 and 1923 when Irish Labour was rocked by three waves of trade union militancy.