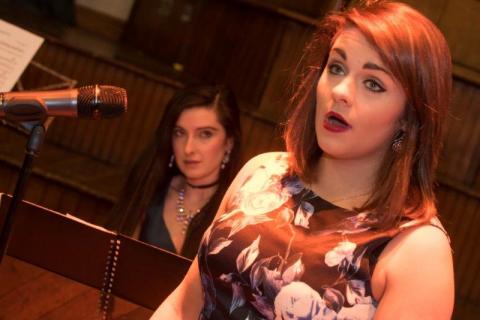 The Tower Museum celebrated the end of its 1916 Untold Stories exhibition at a special evening in the Guildhall on Wednesday 23rd November which featured music from the Allegri Choir, Tracey McRory and Voice and Verse, excerpts from drama productions 'To Thee I Serve' and 'Still, the Blackbird Sings' and readings from poetry and prose inspired by events from 1916.

The 1916: Untold Stories exhibition was launched in April 2016 and brought together stories from 1916, particularly those about the Easter Rising and the Battle of the Somme which were delivered through readings, song, drama and poetry throughout the programme.

The unique exhibition revealed some of the fascinating untold stories of the time focusing on 1916 from a local perspective and capturing some of the personal accounts of local families about relatives living through the era. It also featured a series of special events on a variety of themes from the time which were led by some of the most respected local historians, authors and academics.

The Mayor of Derry City and Strabane District Council, Alderman Hilary McClintock said, 'It has been a real education to learn more about this significant period in local history, especially on the impact it has had on our city and district. I really enjoyed the evening at the Guildhall and hearing about visitors stories relating to 1916 and look forward to the next exhibition opening at the Tower Museum.'

Ronan McConnell, Education Officer at the Tower Museum said, 'The exhibition itself has been running since April of this year and highlights the impact of the seismic events of 1916 on people from the North West and the human connections that still bind us to the past.

'The response to it has been fantastic, with visitors willingly sharing their own connections and stories to 1916 and we have learned a lot of new information since the exhibition opened.'

The event was organised by the Nerve Centre in partnership with Derry City and Strabane District Council Museum and Visitor Services and directed by Jonathan Burgess.