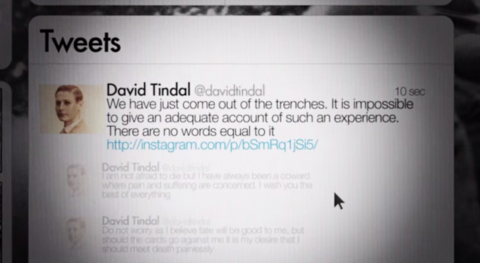 A film which reimagines letters sent home from the Western Front as a series of tweets was a winner at the Imperial War Museum's (IWM) 2014 Short Film Festival.

The short film 'tW11tter' attempts to tell the story of British soldier Private David Tindal for a younger generation via the medium of social media.

Winning Producer Mark Gorton, who took the prize for Best Creative Response and the First World War Commendation, sets a series of tweets to archive footage from the time.

The tweets follow Private Tindal as he sets off for war with enthusiasm and follows his journey as he later realises, 'he who comes through this hell physically and mentally sound can go anywhere'.

Private David Tindal was killed by a shell on June 30, 1916 aged 26. Three days earlier he had written, 'Far better to die early than grow up in poor health, worldly failure, domestic infelicity or many another fate. In touch again when possible.'

You can watch the winning film below: