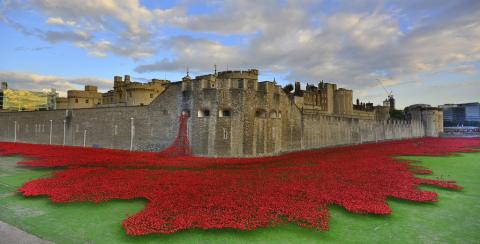 Part of the Tower of London installation of ceramic poppies could travel to Northern Ireland in the coming years, according to MP Jeffrey Donaldson.

Created to mark the 100 year anniversary of the outbreak of the First World War, 'Blood Swept Lands and Seas of Red' saw a ceramic poppy created and installed to represent all the British war dead from the conflict.

Up to 900,000 poppies were created for the artwork which is now on tour to locations across the UK.

And now DUP MP Jeffrey Donaldson, who also chairs the World War One Centenary Committee in Northern Ireland, is keen to see the work displayed here.

'I am confident that a large part of this display will come to Northern Ireland in 2017 or 2018. We are still in the process of putting in an application,' he said.

'I hope Sinn Féin will support this' he added. 'Those who died were nationalists as well as unionists, Catholics as well as Protestants.

'It was a tragedy for us all and we can all remember them with the anniversary of the Somme coming next year.'