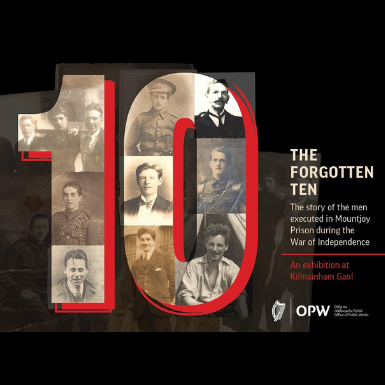 A new exhibition on the War of Independence has opened at Kilmainham Gaol Museum in Dublin.

'The Forgotten Ten' explores the lives of ten men executed by the British authorities at Mountjoy Prison in Dublin in 1921. All had been court-martialled by the British military during the War of Independence, charged with crimes such as murder, treason and levying war. However, the executions were controversial because Mountjoy was a civilian prison, and Dublin was not under martial law at the time.

The ten executed men were buried at Mountjoy Prison, and it was only in 2001 that they were reinterred in Glasnevin Cemetery.

The exhibition explores these executions and the lives of the men who would become known as ‘The Forgotten Ten’. Among the items featured is a statue of the Virgin Mary held by Frank Flood at his execution, and a shirt and collar returned to Thomas Traynor’s family by the prison authorities along with a box containing sixteen unsmoked cigarettes.

One of the most moving artefacts is a box of chocolates originally given to Thomas Whelan by Lester Collins, one of the Black and Tans guarding him in Mountjoy. Whelan in turn gave them to 8-year-old Alicia Mann, his landlady’s daughter. He said that they would eat them together if he was reprieved, but if he was not, she was to eat them all herself. Alicia Mann kept the unopened box of chocolates for the rest of her life.

The exhibition also includes many of the letters and poems written by the men in the run-up to their execution.

“This exhibition on ‘The Forgotten Ten’ features some of the most poignant and moving objects in the Kilmainham Gaol Museum collection. Set against the wider background of the War of Independence, these artefacts tell personal stories of unbearable loss and sadness. Some of them also reveal how, even in the midst of a bitter conflict, acts of kindness and human connection can still occur.”

The exhibition opens on 7 June, the centenary of the final two executions at Mountjoy Prison.