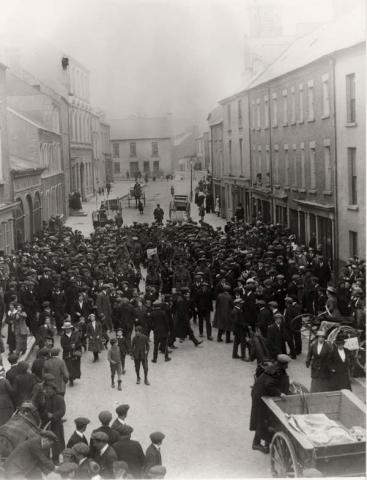 Work of photographer Herbert Cooper will go on show in Strabane Library this month when some of the prolific artist's photographs will be showcased.

The exhibition, running from April 9th - 26th, will be a chance for people to explore a range of photography from the first 60 years of the 20th century, a time when the island was in a period of great transition.

With over 70,000+ glass plate negatives currently in the possession of the Public Record Office of Northern Ireland (PRONI), a selection of Cooper's work will go on show throughout April.

PRONI’s Head of Collections, Heather Stanley said “Generations of people in Strabane and the surrounding area beat a path to Cooper’s studio. Brides came for wedding photographs. Parents brought their children. Young men and women sat for portraits as they set out on life’s adventures.

“The Cooper images held by PRONI show us the changes in fashions and family celebrations over 60 years. These pictures were precious to the local people who commissioned them and PRONI is delighted to bring them back home to Strabane for local people to enjoy once again. We would love to hear from anyone who had their portrait taken by Cooper or who recognises the people in the photographs.”

From his studio in Strabane’s Railway Street, Cooper travelled extensively capturing townscapes and rural scenes. Cooper’s informal style of photography has left us with a unique visual record of life in the North West in the first 60 years of the 20th century. PRONI has now made over 700 Cooper images available to view on the PRONI website on Flickr.

In partnership with Libraries NI, the exhibition will run from 9th April, with a showcase event on Thursday 10th April from 11am to 12pm in Strabane Public Library, with two presentations followed by a question and answer session.