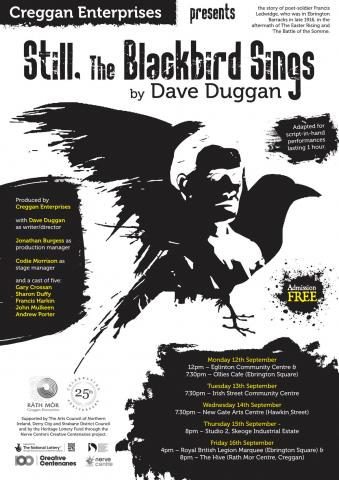 A script in hand version of the Dave Duggan play Still, The Blackbird Sings will tour to community venues across Derry this September, developed by Creggan Enterprises.

First produced by The Playhouse in 2010, Still, the Blackbird Sings tells the story of poet-soldier Francis Ledwidge who was at Ebrington Barracks in late 1916 in the aftermath of The Easter Rising and The Battle of the Somme.

The five actor production follows a squad of Royal Inniskilling Fusiliers in 1916. Having just returned from war in the East, tensions grow amongst the group following the Easter Rising and the Battle of the Somme.

Their Lance Corporal and leader is Francis Ledwidge who writes love poems and lyrical verses while wondering if he's made the right choices. When the lists start going up at Ebrington Barracks for a new campaign in France, tensions boil over as war beckons once more.

The production will tour to community venues across the city this September, including:

The production is supported by The Arts Council of Northern Ireland, Derry City and Strabane District Council and by the Heritage Lottery Fund through the Nerve Centre's Creative Centenaries project.

All performances are free to attend.