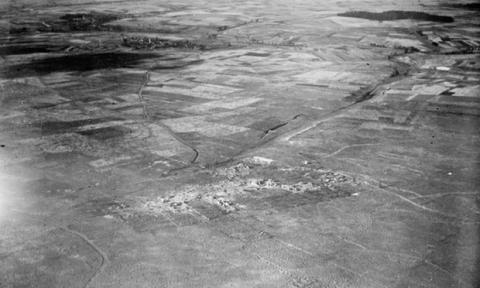 Poet Simon Armitage has been inspired to write new pieces of poetry about landscape images of the Somme battlefield in northern France.

His new poems, matched with images from the battle of the Somme printed from the fragile glass negatives now in the collection of the Imperial War Museum, will be exhibited for the first time this May.

It was the deceptive beauty and apparent tranquility of the historic landscape, captured on reconaissance missions by members of the Royal Flying Corps using a camera strapped to the side of a two-seater plane, which gripped Armitage.

He said the photographs offered an unfamiliar visual perspective of the conflict, seen not from the trenches but from the sky.

These photographs will form a physical and atmospheric backdrop to poems that explore events and locations significant to the Somme offensive.

The result will be a dialogue between military documents of the day and the poetic responses they provoke a hundred years later.

Below is an extract from Still, a new poem from Armitage:

A time will certainly come in these rich vales

When a ploughman slicing open the soil

Will crunch through rusting spears, or strike

A headless iron helmet with his spade,

Or stare, wordless, at the harvest of raw bones

He exhumes from the earth’s unmarked grave.