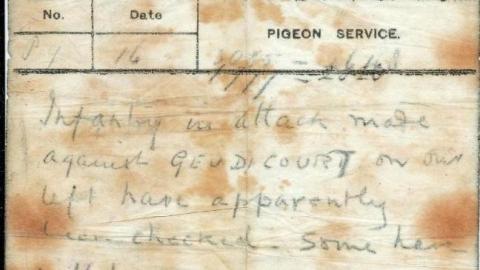 A project by the Royal Mail has unearthed letters relating to the Battle of the Somme, revealing a new side to the battle.

Three letters, which were written on the Somme battlefields, have been released to mark the 100 anniversary of the end of one of the First World War's bloodiest battles.

The letters were unearthed as part of a project marking 500 years of the postal service, which has led to a wealth of letters being discovered on family history.

The Royal Mail said the letters give a glimpse of life on the front line and at home as families struggled to cope.

One of the letters was written by Colonel John Campbell on the battlefields of the Somme on September 16, 1916, hours after he took command of his battalion when it came under fire from German machine guns.

Col Campbell, of the Coldstream Guards, managed to rally his men and eventually captured the German guns, earning him the Victoria Cross.

His note, found by a relative, was written after the capture and was rolled up and transported in a tiny aluminium cylinder by pigeon to brigade headquarters.

In it, he reports the "infantry in attack made against Geudecourt (sic) on our left have apparently been checked. Some have withdrawn" - a reference to the British offensive at Gueudecourt.

David Gold, head of public affairs at Royal Mail, said: "We have received thousands of letters so far and a large number of those were written during wartime.

'Letters and parcels became a vital communication channel between those at home and those stationed abroad. On average 12 million letters and a million parcels were processed a week at an enormous wooden temporary sorting office in Regent's Park.

'These letters show both sides of the battle depicting the amazing feats of bravery that soldiers undertook on a daily basis and the endless struggles that families faced at home under extreme conditions.'