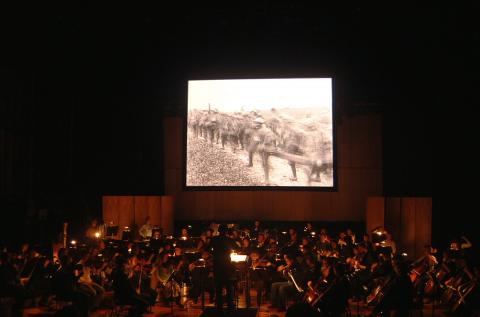 The Studio Symphony Orchestra will provide a unique opportunity in Northern Ireland to experience the Battle of the Somme film with a live orchestral accompaniament.

This special event will take place at the Island Arts Centre in Lisburn in October and will be led by conductor David Openshaw.

Somme100 FILM is an international project, working with the Imperial War Museum as part of the First World War Centenary Partnership to mark the anniversary of the Battle of the Somme. The aim is to bring together 100 live orchestral performances of the ground-breaking 1916 film, The Battle of the Somme.

Shot and screened in 1916, The Battle of the Somme was the first feature length documentary about war. In the first three months of its release the film was seen by around 20 million people in Britain and Ireland, informing and challenging the public with its images of warfare, and changing the way both cinema and film was perceived.

The film was shot by just two cameramen; Geoffrey Malins and J B McDowell. Filming took place between 25 June and 9 July 1916, covering the build-up and opening stages of the Battle of the Somme.

The Battle of the Somme was filmed on the front line at great personal danger to the cameramen, and offered audiences a unique, almost tangible link to their family members on the battlefront. Contemporary reactions to the film varied greatly but most people believed it was their duty to see the film and experience the ‘reality’ of warfare.

The Imperial War Museum took ownership of the film in 1920, and in 2002 undertook digital restoration of the surviving elements. A new orchestral score was commissioned from Laura Rossi in 2005.

The Battle of the Somme film remains the source of many of the conflict’s most iconic images, from the ‘over the top’ sequence to the piggy-back rescue in the trenches, and continues to have great importance not only as a record of war but as a piece of cinema.