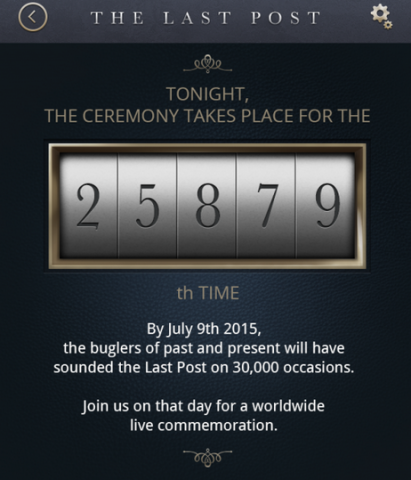 A new smartphone app will include a live stream of the 30,000th sounding of the Last Post at Ypres this July.

Users of the app will be able to listen to the Last Post each night, culminating in the anniversary event on July 9.

The aim of the app is to unite a global audience to listen to the Menin Gate ceremony which started in 1928 in memory of the British & Commonwealth defenders of Ypres, and later became a tribute to all those who died during the First World War.

Buglers of The Last Post Association perform the traditional salute each night at 8pm. The ceremony on July 9 will also be broadcast on a large screen in Ypres.

The Last Post was commissioned by the Last Post Project, a UK centenary initiative aimed at uniting communities in remembrance of the impact of the First World War, and led by arts organisation Superact.