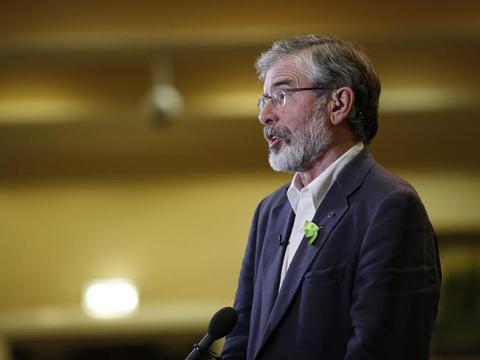 Sinn Féin have launched an alternative Easter Rising programme to that of the Irish Government's ahead of next year's centenary.

Adams also unveiled the party's own video as a response to the 'Ireland Inspires' video made by the government which has now been removed.

Sinn Féin's plans will begin in August 2015 with a re-enactment of the funeral of Jeremiah O'Donovan Rossa and a recreation of Patrick Pearse' famous graveside oration.

They will also fund a 33-week long exhibition at The Ambassador Theatre in Dublin featuring a day-by-day account of the Easter Rising through various mediums and artefacts.

As well as planning to take part in official state commemorations at Easter, the party will also mark the chronological centenary of the uprising with sound and light projections on the exterior of the GPO.

Sinn Féin will also take part in dawn vigils at Kilmainham Gaol from 3am on each of the days coinciding with the centenary of executions of the leaders of the Easter Rising.

James Heron Connolly, great grandson of James Connolly and involved with the Reclaim the Vision of 1916 group, was present at the launch.

'We don't see this as divisive in any way. Sinn Féin has taken a lead. It is now up to others to follow,' he said.

'[The centenary] belongs to nobody in particular, it belongs to everybody. It should be a citizens' celebration, a coming together of all our citizens.'