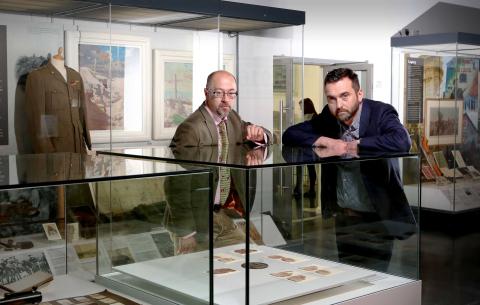 'Remembering 1916: Your Stories', a new exhibition at the Ulster Museum in Belfast, has now opened to the public.

The exhibition features a diverse range of material from the museum's collection, as well as objects and stories collected through the Living Legacies First World War Engagement Centre at Queen's University, Belfast.

Divided into four main sections of 'The Easter Rising', 'The Battle of the Somme', 'War and Society' and 'Legacy', the new display includes never before seen arftefacts alongside an interactive touchtable designed by the Nerve Centre and featuring engaging stories and 3D scanned objects.

Included in the exhibition are a series of objects and personal belongings of those caught up in the events of 1916, including a blood stained book belonging to Co. Derry Private Adam Stewart who died on the first day of the Battle of the Somme. A tunic belonging to Irish Volunteer Jack Greenan from Co. Armagh is also being displayed for the first time.

Two paintings of Thiepval from acclaimed war artist William Orpen, on loan from the Imperial War Museum, are also on display.

William Blair, Head of History at National Museums Northern Ireland said: 'The Easter Rising and the Battle of the Somme appear to lie at opposite ends of our political spectrum, but they are linked by the First World War and the profound social and political change that it brought about.

'Both the Easter Rising and the Battle of the Somme form an important part of the complex weave of history that continues to influence our present and our future.'

The exhibition runs at the Ulster Museum until 2017 alongside a programme of events, workshops, screening and more.