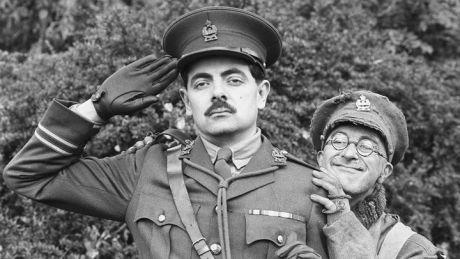 Blackadder is fondly remembered as one of the BBC's finest comedies and recently discovered records show that Blackadder, Darling and Baldrick did take part in the First World War.

The research has also found that Private James Baldrick was from Derry~Londonderry.

'We were uploading new information onto our database when we came across a Captain Blackadder,' said Dominic Hayhoe from Forces War Records.

'As fans of the television show, we wondered in we could find the military records of other characters' namesakes. So we challenged our team of professional researchers and military experts, who are all based in the UK so are familiar with the Blackadder series, to find them, which they did.'

According to the unearthed records, James Baldrick was born in 1892 and although little is known of his early life, he is registered as living in Derry in 1901 at the age of nine.

Called up to regular service at the outbreak of the First World War, Baldrick was sent to the Battle of Le Chateau and was killed in action on October 20, 1914, aged 23.

Along with others from the city who died in the First World War, Baldrick is commemorated at the war memorial at the Diamond.