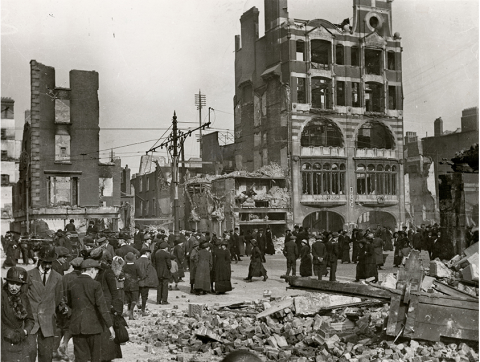 Rare photographs of the events surrounding the Easter Rising, many of them never seen in public before, go on display in London this week in the first major 1916 centenary event in Britain.

Easter Rising 1916, which opens at the Photographers’ Gallery on Thursday, features 80 photographs from the collection of London-based collector Sean Sexton. Within Sexton's collection of around 1,000 early Irish photographs, there is a notable number relating to key events in Irish history, roughly between 1910 and 1930 - many of which have never been reproduced before.

Curated by Luke Dodd, the exhibition explores the role photography played in Ireland's poitical and cultural development in the decades before independence.

With the 1916 Easter Rising as the focal point, the exhibition includes postcards, stereoscopic views, press and military photographs and portraits of executed leaders.

There are images of the political events leading up to, and after, the Rising, however there is a noticeble lack of images of the fighting itself, partially due to censorship.

Martial's law was introduced so that anyone seen with a camera could have been imprisoned, resulting in Sexton's collection of largely amateur shots of the devastation following the Rising. While unsophisticated, these succeeded in capturing the sense of shock and awe of those witnessing the destruction.

Irish nationalists had long used photography for propaganda purposes, with eviction scenes, antiquities and portraits of nationalist heroes becoming highly popular towards the end of the 19th century.

The British authorities understood the political power of photographs too and the exhibition includes a picture issued by the War Office Press Bureau in 1915 to dampen rumours of German support for Irish independence.

Showing a group of Irish soldiers in the British army in the trenches on the western front, it is captioned “The men who disappointed the Kaiser”.

Dodd believes that the Easter Rising radicalised photography in Ireland in the same way as it radicalised politics, putting an end to Home Rule and heralding Sinn Féin’s election victory in 1918.

'Most of the signatories to the Proclamation were absolutely unknown before that and suddenly there’s a very real cast of very photogenic young martyrs and because they were killed so summarily, within a few months their photographs are on sale all over the place and being hung up in people’s houses,' he said.

'The archetypes that were established photographically like the martyr, the hunger striker, all of those suddenly come into play hugely.'

Dodd says that, although most British visitors to the exhibition will know about the Easter Rising, few will be familiar with the events that led up to it. It is an important moment, however, in the story of how photography came to influence history as well as documenting it.

'It was only a decade before 1916 that photographs became mass-produced. So this is one of the first key events in which photographs played an important role because they were very much in the forefront of changing public opinion afterwards,' he said.

Easter Rising 1916 is at the Photographer’s Gallery in London from January 22nd to April 3rd 2016. See thephotographersgallery.org.uk