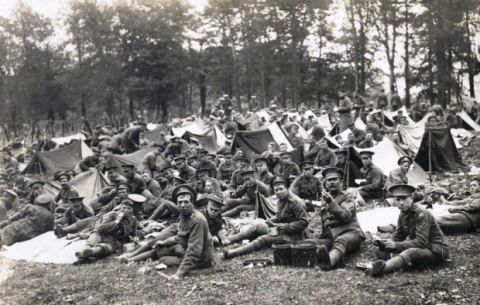 A new First World War journal post from PRONI has been released for July, marking the 100 year anniversary of the Battle of the Somme.

The July 1916 led journal includes information on the beginning of the Battle of the Somme and goes on to reveal the final personal letters and wills of those caught up in fighting.

One letter written by D Sherdman describes the death of Captain James Samuel Davidson on the first day of the Somme. In peacetime Captain Davidson had been the general manager of the Sirocco Works, in Belfast.

'It is with the deepest regret and sorrow I start this letter to you, and cannot express in words what I feel about poor Jim, he always was so good & kind to me. All I can say in my poor way is that he died as he lived a, grand man, and is forever graded as one of “Britain’s greatest Heroes”.

'Our men after fighting for hours were beaten back because of shortage of ammunition and men when this word reached Jim he made his way out of the dugout to try & get back to rally his men, what a noble heart, - but found he was unable to do anything but crawl, therefore as no help was coming across he tried to get back himself and while crossing “Normans land” was shot, I believe through the head & it is believed died instantly in no pain.

'Was not it a glorious ending to a glorious life. I am sorry I am - 5 - unable to write you a good letter but even yet I am not myself after what I have come through this last 10 days, and the tears are rolling down the face of your friend and his friend.'