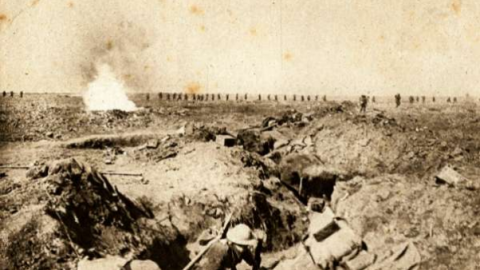 PRONI have unveiled their January 2016 blog which continues to chart the stories and content from men and women who lived during the First World War.

At the same point in 1916, the final withdrawal of French and British troops from the Gallipoli Peninsula was completed without casualties and the remains of the Serbian army were evacuated to Corfu.

Fighting continued on the other fronts. In Britain, conscription was introduced for unmarried men, however Ireland was exempted from the legislation.

The January blog features, amogst others, a letter home from Portstewart man Sammie Shaw to his dad, who was serving with the 10th Royal Inniskilling Fusiliers in France.

'There is one thing we may all look forward too that is the war will be over this spring. We will put them back into their own country quicker than they left it.

'You said in your letter that Ireland was not included in the Conscription Bill, but as far as Home Rule goes its knocked on the head for ever. When the Tommies out here see what Ulster has done for Britain they say that Home Rule is and will always be a thing of the past.'