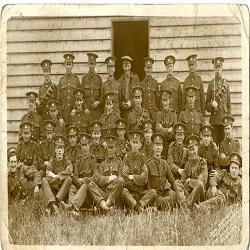 The February edition on PRONIs monthly blog is now online and continues to chart the personal stories of men and women who lived during the First World War.

PRONI hold a wide range of records including letters, diaries and memoirs relating to the First World War and to contemporary events in Ireland, providing firsthand accounts of all aspects of war as well as the impact it had on life at home.

The February blog edition features a unique insight into the spectacles faced by soldiers during battle, from Captain Gerald Burgoyne from the 2nd Battalion of Royal Irish Rifles south of Ypres.

Recalling a particular moment of battle, he said: 'It was like a display of summer lightning. A momentary glow in the skies on my left, followed many seconds later by the sound of the gun, before which I could see the equally evanescent glow to my front where the shell had burst. I think the Germans must have made an attack of some sort. But it was not very severe apparently.

'A topping spring day. It was a white frost about midnight, but could not have lasted long, as all the place is mud once more. But the air is soft and mild. Just the very day for a hunt and scent would have been grand.'

Every month, PRONI will publish transcripts from the personal papers and diaries of a range of individuals who lived throughout the period.