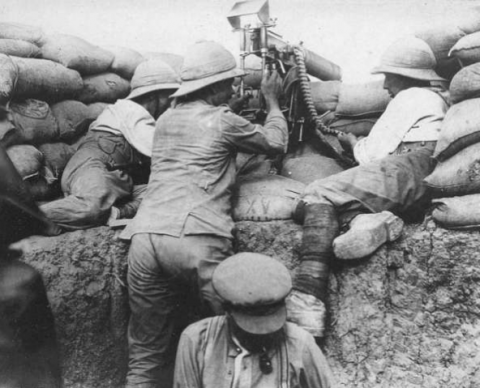 A newly released blog from PRONI, the Public Records Office of Northern Ireland, charts the experiences of Irish voices during the Gallipoli and Dardanelles campaigns from February 1915 to January 1916.

PRONI hold a wide range of records including letters, diaries and memoirs relating to the First World War and to contemporary events in Ireland, providing first-hand accounts of all aspects of war as well as the impact it had on life at home.

This edition of the now monthly journal series features a comprehensive collection of stories and experiences from the front lines including detailed descriptions of mine sweeping and what greeted soldiers as they landed on the Gallipoli peninsula.

Major Jocelyn Ryan served with 6th Ghurkha Rifles and in a letter to his aunt in Loughbrickland, Co. Down, he gives a summary of his regiment's experiences.

'The Turks have very expert snipers and it took us some time and cost as a good many men before we got the better of them, and when we left the trenches on being relieved I think we were top dog alright. Our men got quite cute at it.

'There was one sniper we couldn’t get who had done a lot of damage. Eventually one man thought of a plan. The body of one of our dead snipers was lying in an exposed position, he volunteered to crawl to it to pretend to bring it in, but before he went out he posted a good shot away on one of the flanks; then he crawled forward. The Turkish sniper showed himself to have a shot at our chap, and got a bullet through the head from our flank men. You have got to be ever so cute to catch them.'

PRONI will continue to publish transcripts from the personal papers and diaries of a range of people who lived throughout the period, on a monthly basis.