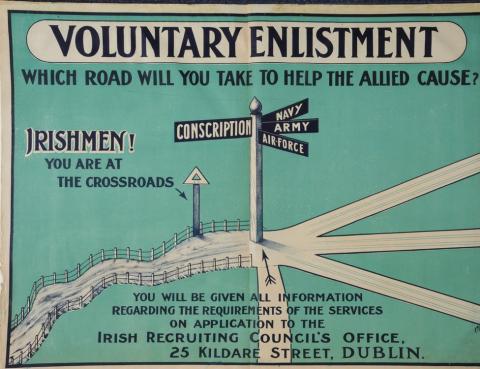 An exhibition of original posters used throughout the First World War has opened at the Ulster Museum.

The 'Answer The Call' exhibition includes poster campaigns which ran from 1914 to 1918, encouraging enlistment and other 'home front' activities.

Dr Vivienne Pollock, Curator of History for National Museums Northern Ireland, said, 'The exhibition was curated to reflect the fascinating shifts in approach during the war.

'In 1914, the enlistment campaigns appealed to patriotic and moral values as well as a sense of adventure. As the war continued, these public appeals increased in their sense of urgency and their methods became more varied and sophisticated.'

Answer The Call is just one of National Museums Northern Ireland's series of events and exhibitions to mark the centenary of the outbreak of the First World War.

Running until May 2015, the exhibition is free to attend.