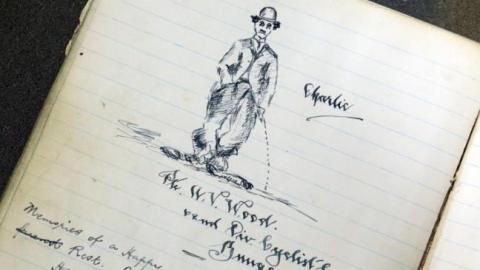 Between 1916 and 1917, hundreds of troops from across the UK often stopped at the now derelict Peterborough East Railway Station in Cambridgeshire.

Many took the time to write and sketch in visitor books kept in the station's tea room.

A team of volunteers took the time to transcribe the 570 poignant entries which have now been digitised and publised online for the first time, giving descendants a glimpse of what life was like.

Richard Hunt, archives manager for Vivacity Culture and Leisure, which recruited the volunteers, said the messages provided a 'unique insight' into the authors thoughts and feelings.

'Some are simple words of thanks, others talk of love and hope.

'We want to try to paint a personal picture of the men who once found comfort in Peterborough.

'We have found out some of the facts of some of their lives, but are appealing for their descendants to come forward to add colour to the stories of these heroes' he said.

Army Cadet Miller Jamieson from North Shields stopped at the station on his journey back to the front in December 1916.

He wrote: 'When the war-drum throbs no longer, may I - going North - be here again.'

He was presumed killed in action in Flanders a little over five months later and never made the trip home.

The project has been funded by a £99,000 Heritage Lottery Fund grant.

Those wishing to find out if their ancestor wrote in the book can visit www.peterboroughww1.co.uk where a list of all the names and service details of those featured has now been published.