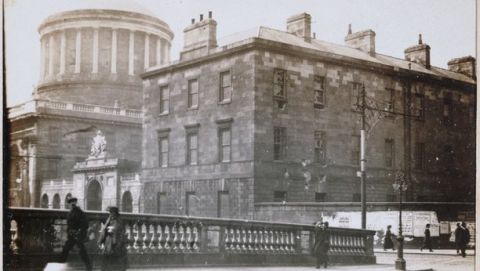 Dozens of images shot in the aftermath of the Easter Rising in 1916 have been unveiled online by the Digital Repository of Ireland.

Images show the destruction caused throughout the city were taken by Thomas Johnson Westropp on May 17 and 18, just over a fortnight following the uprising. The images were later donated to the Royal Irish Academy.

Aerial and street level angles were photographed across the city including of Sackville Street (now known as O'Connell Street) and the Four Courts.

Royal Irish Academy Librarian Siobhán Fitzpatrick said, 'He obviously went to great lengths to take many of the photographs which are preserved in the collection. The fact that he had the images developed, printed and mounted in an album within a week conveys a certain sense of urgency.'