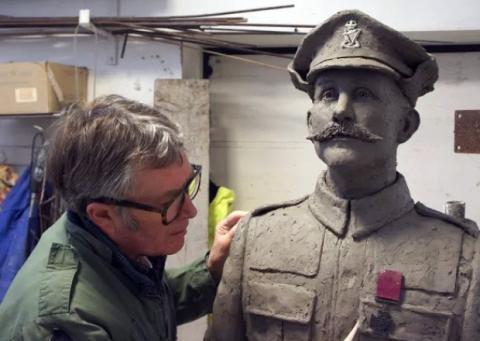 A new memorial statue to Bushmills man Robert Quigg VC will be unveiled in the County Antirm town this June.

Quigg was awarded the Victoria Cross for exceptional valour in the face of the enemy on the first day of the 1916 Battle of the Somme.

Following a number of assaults on German lines, the former farm worker was aware of rumours that his platoon officer, Lt Harry Mcnaghten, was lying wounded in no man’s land.

Venturing out of his trench under heavy shell and machine gun fire, the Royal Irish Rifles’ private searched in vain for the lieutenant but was able to rescue another wounded comrade from certain death. Quigg left the trench a further six times - saving another soldier on each occasion.

David Annand is currently putting the finishing touches to his sculpture of Robert Quigg VC which will be cast in bronze and placed in the Co Antrim town’s Main Street.

The renowned sculptor - whose previous work includes the Robert Dunlop bronze in Ballymoney - has been working on his depiction of the Causeway coast man for many months.