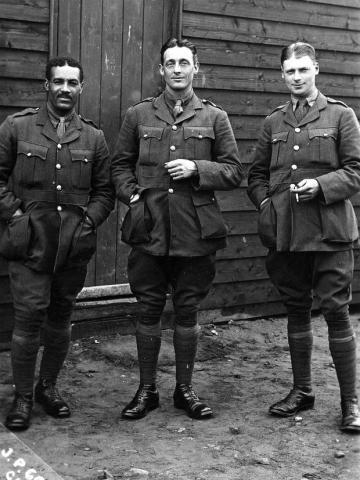 A new film based on Walter Tull, the first black British Army Officer to lead troops into battle, is due to released in time for the centenary of the Battle of the Somme in 1916.

Tull, who died on the Somme battlefield, was also the second black professional footballer to play in Britain, joining Tottenham Hotspur in 1909.

Nathan Ives-Moiba, Vinnie Jones and David Morrissey will be among the cast as Tull, his coach and Reverend respectively.

Walter Tull has become more widely recognised in recent years and last month The Royal Mint recognised his impact and legacy by putting his image on a £5 coin to commemorate the First World War.

He was killed in action in Northern France on March 25, 1918 and his body was never recovered. Although recommended for the Military Cross, he never received it.

Shooting of the film, which will be known as Tull, is due to begin next year with a release date of July 1916 to mark the anniversary of the Battle of the Somme.