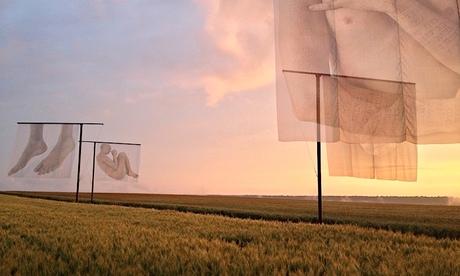 South African artist Paul Emmanuel has created a series of outdoor installations near the Thiepval Memorial at the Somme, designed to engage with memory and public grief.

A series of banners featuring Emmanuel’s body, with the names of servicemen from across the First World War divide pressed into his skin, are located along the road leading up to the British memorial.

The work was made public on July 1 to mark the 100th anniversary of the beginning of the Battle of the Somme, one of the war’s most important and deadly encounters.

The project is part of the French government’s official exhibition of the First World War centenary.

‘A war has lasting psychological effects that are passed from generation to generation; we lose humanity, gentleness and vulnerability, feeling, empathy and sensitivity. As the Thiepval memorial bears witness, it is a non-partisan artwork that aims to stimulate contemplation about all of this.’