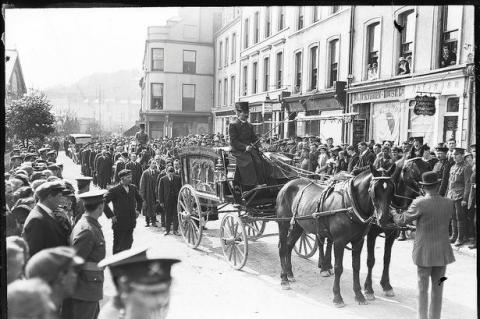 A new collection of never-before-seen photographs have been put on show to commemorate the centenary of the sinking of the Lusitania.

Over 60 images have went on display in Cobh (formerly Queenstown) where a temporary morgue was established in 1915 to recover the dead following the sinking.

The luxury liner was torpedoed off the southern coast of Ireland on May 7, 1915, with over 1,900 people killed in the attack.

A series of striking imagery has now gone on display covering the aftermath of the sinking which depicts mass funerals and survivors on the streets.

The Lusitania Centenary Photographic Collection was launched ahead of the centenary of the event, which will be marked with a series of events and programmes in early May. The exhibition is open daily and runs until the end of May.