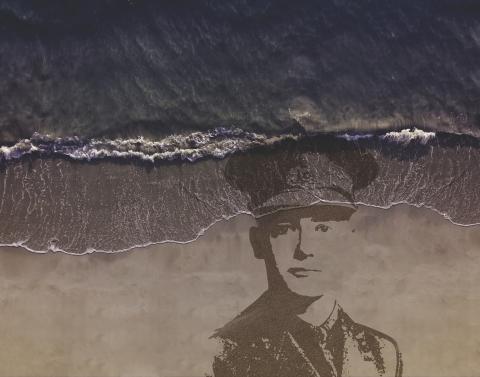 Nerve Centre will be part of Pages of the Sea, Danny Boyle’s commission for 14-18 NOW to mark the centenary of Armistice Day. On 11 November 2018, the public is invited to gather on beaches across the UK for an informal, nationwide gesture of remembrance for the men and women who left their home shores during the First World War.

Millions of people served in the First World War and many left by sea. Nerve Centre will be leading events at Murlough Beach, Co. Down on Sunday 11 November.  Each event centres around the drawing of a large-scale portrait of a casualty from the First World War, designed by sand artists Sand In Your Eye, which will be washed away as the tide comes in. In addition, the public will be asked to join in by creating silhouettes of people in the sand, remembering the millions of lives lost or changed forever by the conflict.

Poet Carol Ann Duffy has been invited by Boyle to write a new poem, which will be read by individuals, families and communities as they gather on beaches on 11 November. Copies of the poem will be available at the beaches around the UK for those who wish to come together or to offer their own personal contribution.

"Beaches are truly public spaces, where nobody rules other than the tide. They seem the perfect place to gather and say a final goodbye and thank you to those whose lives were taken or forever changed by the First World War. I'm inviting people to watch as the faces of the fallen are etched in the sand, and for communities to come together to remember the sacrifices that were made."

The public is also invited to explore an online gallery of portraits of some of the men and women who served in the First World War, and select someone to say a personal goodbye to either via social media or as they gather in person on beaches on 11 November. The images are drawn from the Imperial War Museum’s ‘Lives of the First World War’ which aims to tell 8 million stories of those who served from Britain and the Commonwealth. Visitors to the website can also add portraits of members of their family or community who contributed to the First World War.

“Nerve Centre is delighted to be working in partnership with 14-18 NOW and Danny Boyle on this new commission. Pages of the Sea will encourage people to reflect on the profound significance of the First World War and its legacy. Around 200,000 men and women from Ireland served over the course of the war, with many thousands leaving these shores never to return.”

"Danny Boyle has created a beautiful, poetic artwork that invites people across the UK to participate in a new nationwide gesture of remembrance on the centenary of Armistice Day. It is a fitting farewell to all of those who served and were affected by the First World War. I would like to thank Danny Boyle, Carol Ann Duffy and all our partners and funders for their help in realising this ambitious project."

Supported by The National Lottery and the Department for Digital, Culture, Media and Sport.

The public can see which beaches are taking part by visiting www.pagesofthesea.org.uk. #PagesoftheSea