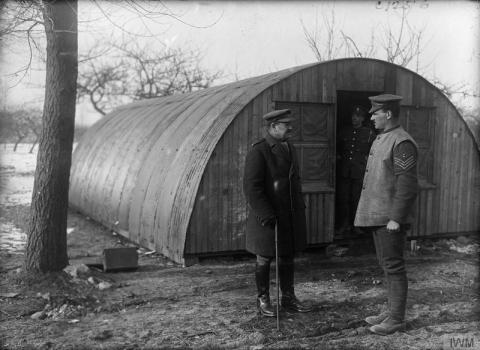 The Nerve Centre have co-commissioned a piece with artist Anne Tallentire to work with architects, activists and volunteers to explore Nissen Huts, first invented in 1916 during the First World War.

In Shelter, Anne Tallentire will explore the architectural legacy of the Nissen hut, the curved structure invented during the First World War to house soldiers and supplies.

Tallentire will create work across a range of media, including drawing, photography and film. In June and July, visitors will be invited to watch her work in an open studio at Eighty81, a former army barracks in Derry-Londonderry.

Tallentire will also work with architects, activists and volunteers to produce a large-scale work, which will be exhibited in outdoor public spaces, including Ebrington Square in Derry-Londonderry and the Ulster Museum in Belfast. Shelter is a co-commission with Nerve Centre.

Further highlights of the programme in Northern Ireland include:

Fearghus Ó Conchúir's ambitious dance commission The Casement Project is inspired by the British peer, Irish nationalist and international humanitarian Roger Casement, who was hanged in Pentonville Prison in 1916.

Knighted for exposing human rights abuses in the Congo and the Amazon, his support for Irish nationalism during the First World War was a British scandal. His homosexuality was even more scandalous.

The project will include stage performances, a film, an academic symposium, a summer beach dance festival and a series of other opportunities for the public to participate in the project. The work will be performed in Belfast in Autumn 2016.

In his first Northern Ireland appearance, the Obie Award-winning New York performer Taylor Mac will present The WW1 Years and More; a series of participative concerts at Belfast International Arts Festival in October 2016.

In two concerts, his astute take on music and culture spans the years before, during and after the First World War from 1896 through to 1926. His third concert will be a ten-decade spectacular from 1916, the year of the Battle of the Somme and the Easter Rising, through to 2016.

Accompanied by a live band and dressed in a dazzling array of costume creations, Mac will reflect on notions of authority, class, empire, gender, patriotism and war, and differing perceptions and attitudes to how history is made and viewed.

Radio Relay will explore historic moments in the development of radio, from the first pirate broadcast during the Easter Rising to the trench radios that were first used at the Battle of the Somme.

Artists including Graham Fagen, Paddy Bloomer, Gareth Moore, Philip Hession and Mhairi Sutherland will create new works for a nationwide programme with participation at its core.

As part of a unique midsummer weekend at Belfast's ancient Giant's Ring, from 18 - 20 June 2016, visitors will be invited to work with artists to build their own lo-fi radio transmitters and make silver kites to recreate early experiments in radio antennae.

Jenny Waldman, Director, 14-18 NOW, said: 'One hundred years ago this year, the First World War was entering its darkest days.

'As the conflict entered its third year it must have felt as though the war would last forever, a sensation heightened by the intense brutality of the Battle of the Somme.

'It is important to remember the momentous impact of the First World War in Northern Ireland as well as mark the centenary of the Easter Rising.'

Taking place between 22 March and 18 November across the UK, 14-18 NOW's 2016 programme explores themes such as the changing role of women, the treatment of conscientious objectors and the contribution of Asian soldiers.

Other highlights of the 2016 season across the UK include:

14-18 NOW is funded by the National Lottery through the Heritage Lottery Fund and Arts Council England, and by the Department for Culture, Media and Sport. 14-18 NOW is an independent programme hosted within Imperial War Museums.

For details of the full programme please see: www.1418now.org.uk