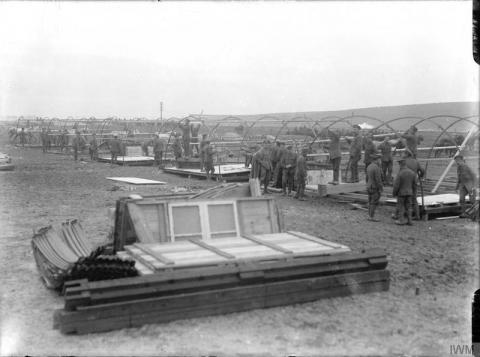 Irish artist Anne Tallentire will consider an architectural legacy of the Nissen hut, the curved structure invented during the First World War to house soldiers and supplies, in a major new work Shelter, co-commissioned by the Nerve Centre and 14-18 NOW, the UK’s arts programme for the First World War centenary.

Shelter will explore material and conceptual relationships between the historic Nissen shelter and contemporary building practices associated with how emergency architecture is responding to the humanitarian crisis and the mass movement of peoples in Europe today.

Working in a range of media including text, drawing, assemblage and video Tallentire will exhibit Shelter on site at the Ebrington Parade Ground from 2 – 9 July and at the new Nerve Visual gallery throughout July. The work on the parade ground will include a series of seven daily live events.

In June, visitors are invited to the open studios where Tallentire will be at work. The studios are located in the Nerve Visual gallery, Eighty81, the former army barracks in Derry-Londonderry which housed the Turner Prize during City of Culture 2013.

Shelter is curated by Nerve Centre, Declan Sheehan, 14-18 NOW and Tamsin Dillon, and has been made in consultation with award-winning architect Grainne Hassett.

David Lewis, Director of Communications and Digital Content at Nerve Centre, said: 'The Nerve Centre is delighted to be re-opening the Turner Prize gallery spaces with this major new work Shelter by Anne Tallentire, in partnership with 14-18 NOW.

'The invention of the Nissen hut left an architectural legacy across Europe, not least in Derry~Londonderry, where people were living in similar structures in Springtown Camp up until the 1960s. The Nerve Centre is excited to be working with an artist of Tallentire’s calibre and international reputation to explore this legacy.'

Shelter is one of four major events and new commissions taking place across Northern Ireland in 2016, as part of the 14-18 NOW programme. 14-18 NOW is the UK's official arts programme for the First World War centenary and is funded by the National Lottery through the Heritage Lottery Fund and Arts Council England, and by the Department for Culture, Media and Sport.

The Nerve Visual gallery will open on Thursday, June 16 with Shelter by Anne Tallentire, which runs to July 31. Key dates and times are as follows:

For more information on Shelter and Nerve Visual visit www.nervecentre.org