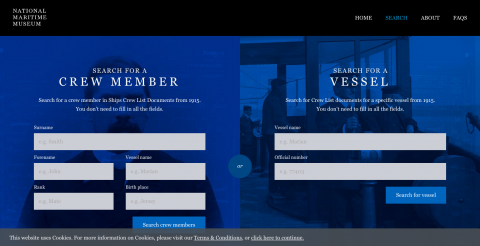 A centenary project launched in 2012 to highlight the 'vital contribution made by the Merchant Navy during the First World War', has unveiled huge records on men who served on ships in 1915.

Over 35,000 handwritten crew lists featuring 750,000 names have been transcribed by volunteers from across the world to create an online, searchable database of names.

The volunteers responded to a call from the National Maritime Museum in Greenwich and the UK National Archives to help uncover the details included in the records.

Martin Salmon, Archivist at the National Maritime Museum, said: 'There is a temptation to think that the British Merchant Navy was composed entirely of British seafarers but nothing could be further from the truth. Often British subjects were in the minority on some of these vessels.'

The records uncover a period of dangerous escalation at sea for the mercantile marine services, including the torpedoing of the RMS Lusitania on May 7, 1915.