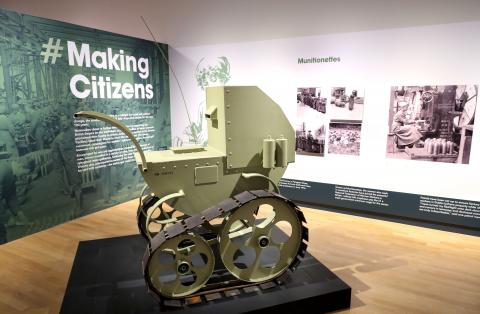 When 1916 began, few people in Ireland could have imagined how dramatically their lives would be changed by the events of the year.

As the carnage on the battlefields of Europe intensified, violence emerged at home in April. Both the Easter Rising and the Battle of the Somme would change the course of Irish history.

Now, a new Creative Centenaries #MakingHistory 1916 Exhibition at the Ulster Museum from June 3 explores how creativity and innovation were able to flourish amidst the horrendous destruction.

Seen for the first time, the exhibition features diaries and drawings by Newry nurse Olive Swanzy, who cared for soldiers on the Western Front, and Jim Mault said, who served with the 14th Battalion of the Royal Irish Rifles and was seriously wounded on the first day of the Battle of the Somme.

Art works include a giant handmade drone ‘war rug’ commissioned by Dublin-based artist Jim Ricks and made by a family in Kabul, Afghanistan, which visitors will be able to sit on; ‘Armoured Pram for Derry’ by Eamon O’Doherty; and a new audio installation by Ceara Conway.

The exhibition is led by the Nerve Centre, delivered in partnership with National Museums Northern Ireland, and supported by the Heritage Lottery Fund, Department for Communities, Community Relations Council and the Department of Foreign Affairs & Trade.

Speaking at the launch of the #MakingHistory 1916 exhibition, David Lewis, Director of Communications and Digital Content at Nerve Centre, said: 'This major interactive exhibition brings together music, art, illustration, early animations and never-seen-before archive material to highlight how ordinary people, both at home and on the front line, helped shape history. It is the latest exciting output from the Nerve Centre’s Creative Centenaries project which uses digital technologies to explore our past in an inclusive, respectful way.'

National Museums Northern Ireland’s Head of History, William Blair, said, 'This exhibition powerfully conveys how war can act as a catalyst for change, impacting on all aspects of life and driving change in society, politics and technology. National Museums Northern Ireland are delighted to have been involved in delivering #MakingHistory 1916. It has been a genuinely collaborative project, pooling resources and expertise from organisations across Northern Ireland. The result of this collaboration is an engaging, thought provoking and interactive exhibition which will appeal to all ages.'

Paul Mullan, Head of HLF Northern Ireland, said: 'Past events within the Decade of Centenaries still have huge importance for us today, shaping our understanding of ourselves, our communities and our future. It is with thanks to National Lottery players that we can support this 1916 exhibition and programming at the Ulster Museum. The use of new and exciting technology will interest and inspire a wide range of audiences with the heritage, and we are delighted to be involved.'

A programme of events including talks and curator-led tours, digital and creative workshops, and family activities will run at the Ulster Museum and beyond through the summer to accompany the #MakingHistory 1916 exhibition, which runs until September 18.

Admission to the exhibition at the Ulster Museum is free. For more information visit www.nmni.com/um