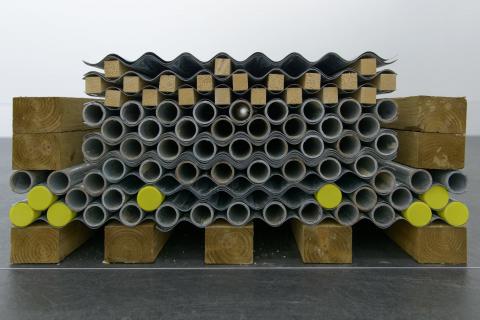 In Shelter, Tallentire considers the architectural legacy of the Nissen Hut, the curved structure invented during the First World War to house soldiers and supplies, in a co-commission by the Nerve Centre and 14-18 NOW.

Tallentire’s work is concerned with an understanding of migration, displacement, built environments and the conditions of daily life.

Shelter explores the material and conceptual relationships between the historic Nissen Hut, invented for the mass mobilisation of troops stationed across the continent 100 years ago and how contemporary modes of 'emergency architecture' respond to the precarious and humanitarian crisis of the 'mass movement of peoples' in Europe today.

For Shelter, the artist has researched and collated the contemporary building materials required to construct a 2016 version of a human shelter based on the Nissen Hut. In June 2016, Tallentire developed schematic diagrams for a series of seven works during an Open Studio phase of the project in the Nerve Visual gallery in Buildings Eighty81, a former army barracks in Derry-Londonderry which housed the Turner Prize in 2013.

In July, the diagrams were realised in situ on Ebrington Parade Ground for one day only. At the end of each day, the work on the parade ground was returned to the gallery/studio and re-assembled as sculptural works exhibited alongside video, text and photographs.

Three of these sculptural works will now be exhibited in the #MakingHistory 1916 Exhibition at the Ulster Museum. Visitors are also encouraged to take a copy of the accompanying publication, which takes the form of Flip Chart format, and consists of text work related to the methodology of the project and an essay by Claire Feeley.

Shelter is one of four major events and new commissions taking place across Northern Ireland in 2016, as part of the 14-18 NOW programme. 14-18 NOW is the UK's official arts programme for the First World War centenary and is funded by the National Lottery through the Heritage Lottery Fund and Arts Council England, and by the Department for Culture, Media and Sport. Shelter is curated by Declan Sheehan, Nerve Centre, and Tamsin Dillon, 14-18 NOW and has been made in consultation with architect Grainne Hassett.

The #MakingHistory 1916 Exhibition includes five zones that bring together extensive photographic, audio and video material, alongside contemporary artwork reflecting on the exhibition themes. The exhibition is led by the Nerve Centre, delivered in partnership with National Museums Northern Ireland, and supported by the Heritage Lottery Fund, Department for Communities, Community Relations Council and the Department of Foreign Affairs & Trade.

Admission to the exhibition at the Ulster Museum is free. For more information visitwww.nmni.com.