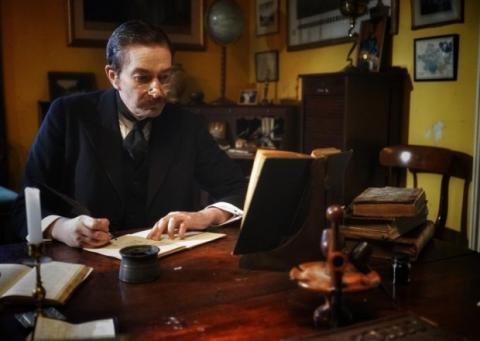 Ballymena actor Vincent Higgins will take up the role of an Irish nationalist who tried desperately to prevent the Easter Rising in a new BBC documentary.

The Irish language programme Eoin MacNéill - Fear Dearmadta 1916 (Eoin MacNeill - The Forgotten Man of 1916) gives an insight into one of the Easter Rising’s most controversial events; MacNeill’s attempt to prevent it from taking place.

Eoin MacNéill, played by Higgins, was a revolutionary, scholar and politician from Glenarm, County Antrim. The programme explores the influence growing up in this setting had on his life and work.

MacNéill founded the Gaelic League in 1893, and it was in the organisation’s newspaper An Claidheamh Soluis that he wrote the infamous article that would lead to the founding of the Irish Volunteers in 1913.

Pivotal moments in history are brought to life through access to MacNéill’s private memoirs, dramatic reconstructions, interviews with key historians and experts, and also the accounts of MacNéill’s grandson, former Tánaiste Michael McDowell.

The reasons behind MacNéill’s controversial decision to issue a countermanding order in an attempt to prevent the Easter Rising is also examined.

Director Damian McCann believes that maligned decision is one of the most interesting aspects of MacNéill’s story, ‘MacNéill has a complicated legacy, and that is always interesting for a director - it presents a unique challenge.

‘There is a deep divide in opinion about MacNéill, but a story cannot be told simply, by portraying him as a hero or a hate-figure. It is not black and white, and in fact, MacNéill’s dramatic life reflects the complex history of the period.’