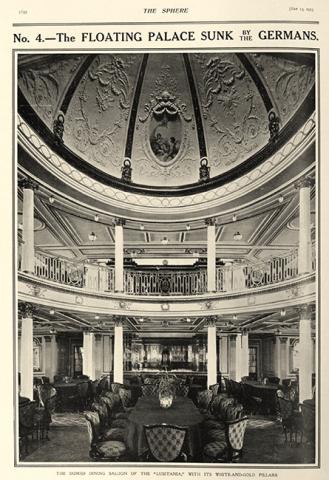 Libraries NI have compiled a new virtual exhibition on the Lusitania called, 'The Lusitania is Safe - No Single Torpedo Can Sink Her'.

The famous ocean liner, once described as a floating palace, was sunk b y a German U-boat on May 7, 1915.

A total of 1,198 men, women and children lost their lives in the attack including Irish, British and Americans. The event is believed to have acted as a precursor to the United States entering war in 1917.

The unveiling of this onlne exhibition comes during the centenary of the sinking.

Images used in the collection have been compiled from two 1915 illustrated newspapers - The Graphic and The Sphere - which are available for consultation from Belfast Central Library Information Services.

Creative Centenaries is currently developing a comic book resource on the sinking of the Lusitania focussing on real characters from Ireland caught up in the tragedy.