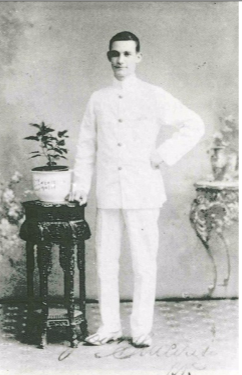 Libraries NI will launch a new interactive exhibition on its website to mark the centenary of the Battle of Jutland and the role of Newtownstewart man Robert Kerr who took part in the battle.

Robert Kerr, Royal Navy engineer and gifted poet from Newtownstewart was on the HMS Defence when his vessel was sunk in action at the Battle of Jutland on 31 May 1916 - he was just 24 years old.

Robert is just one voice out of the thousands who were killed at the Battle of Jutland but his words speak for all who lost their lives during this momentous sea battle.  His memory, his courage and his poetry are remembered on the 100th anniversary of the historic First Word War engagement.

Selected Poems by Robert Kerr are available for consultation only, in Omagh Library Heritage Department. Click here for more information on the project.