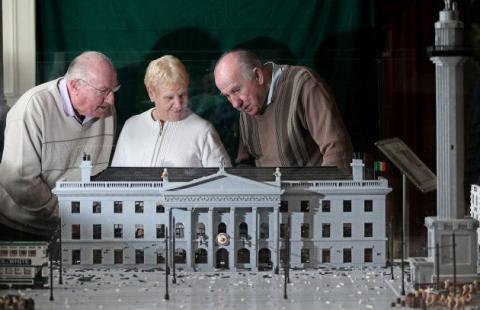 A recreation of the GPO from the time of the Easter Rising has been built using lego.

It took lego enthusiast Paul Derrick from Monaghan two years and 50,000 lego blocks to recreate the Dublin landmark and headquarters for the 1916 rebellion.

Lego characters have been made to look like Irish rebels including one representing an injured James Connolly.

The Lego GPO scene has been installed in the An Post headquarters for the next few weeks, and is already drawing great admiration from customers of all ages.

The 4m-long scene of 1916 Sackville St, later renamed O’Connell St, also features a tram caught in the mêlée at the outbreak of the Rising, and the overhead tramlines.

A number of the buildings that stood alongside the GPO are also reproduced, while the eventual fate of the postal building is hinted by the sight of flames coming from side windows.

An Post’s head of corporate communications, Anna McHugh, said that the model is a work of art, with two years of design invested by Paul, who sourced Lego pieces from around the world.

'To see so many customers and visitors of all ages and nationalities enthralled by the scale and detail of the 50,000 piece model is wonderful in this special year,' she said.