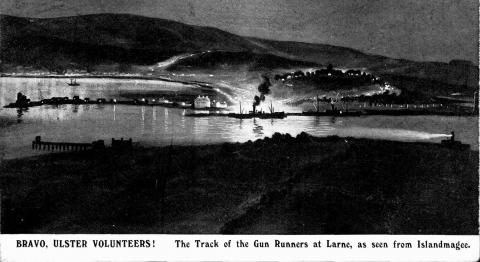 On the night of April 24, 1914, thousands of German and Austrian rifles and millions of rounds of ammunition were unloaded from a coal boat at the ports of Larne, Donaghadee and Bangor.

Working under cover of darkness, 12 to 14,000 ‘Ulster Volunteers’ were involved in the subterfuge.

This week, 100 years on, thousands of people turned out in Larne to watch a commemorative parade, with many paraders in period costume and travelling in vehicles from the time.

Billy Adamson, one of the organisers, said: 'Rightly or wrongly, whatever we think about the politics of it, it shaped the province's future. It marked an event in Northern Ireland's history and it has been significant down through the years.'

Watch a BBC News report on the parade here:

In 1914, Bob Hanson and his father, a member of the Royal Irish Constabulary, were Ulster Volunteers. In this clip Bob recalls the part he and his father played in the Larne gun running operation. The interview with Larry McCoubrey was broadcast in Ulster Review on April 24, 1964.