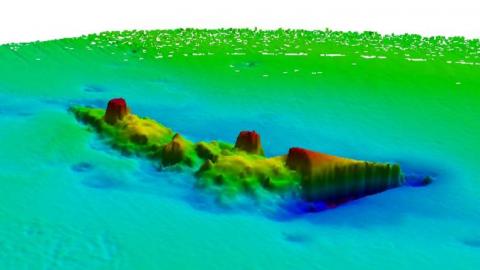 3D scans have been produced of ships sunk during the First World War's largest naval battle.

The Battle of Jutland, which took place in the North Sea on May 31 1916, is considered the only major naval battle of the war. The result was the British Navy losing more men and ships than the Germans.

6,094 British and 2,551 Germans were killed during the battle. The result, however, was that the German Navy were no longer in a position to control the seas during the war.

A Royal Navy ship scouring the area has now uncovered and scanned 25 warships, 14 of them British, which were blown up on May 31, 1916.

The scans are helping to build a clearer picture of the battle said historian Nick Hewitt.

'The condition of the wrecks varies enormously. Some have suffered badly from post-war attempts to salvage them, but others are astonishingly intact,' he said.

'HMS Defence in particular was 'reduced to atoms' according to one contemporary account, but the wreck was complete, upright and immediately recognisable by the distinctive profile of her secondary armament, still trained outboard towards her foes a century after the battle.'

HMS Caroline, the last surviving battleship of the First World War and involved at the Battle of Jutland, is currently undergoing a major restoration project at Belfast's Alexandra Dock.

It is hoped the ship will be turned into a large scale visitor attraction in time for the centenary of the Battle of Jutland in 2016.

Click here to view some of the 3D scans.