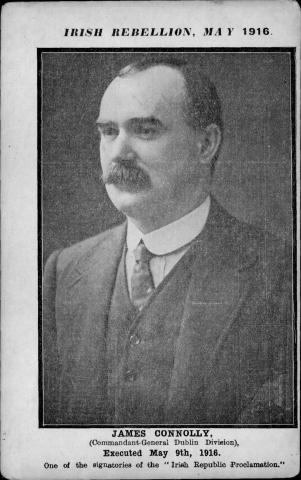 Plans have been developed to turn James Connolly's former home into a visitor museum and interpretative centre.

Connolly, who was one of the leaders of the Easter Rising and one of the Proclamation's seven signatories, lived off the Falls Road in West Belfast.

The plans include developing the house to recreate what it would have looked like during his time there. Other exhibits and digital archives are proposed to form part of the development, from which funding will be sought from the Heritage Lottery Fund.

Sinn Fein Councillor Jim McVeigh is involved in the project, which it is estimated will cost around £1m.

'We think there’s huge heritage and tourism value in this house. James Connolly was such a significant figure not only in the trade union movement in Ireland, but internationally as well,' he said.

'That’s why this could attract people from across the spectrum. It could be used by schools for education as well as adding to the already existing tourism there is in West Belfast.'

Rather than focus on Connolly's role in the Easter Rising, it's thought the museum would also look at his role as a trade union leader.

The centre is not expected to be ready in time for the Easter Rising centenary in 2016, however a large bronze statue of Connolly is to be unveiled at the Falls Road Community Council ahead of next year.