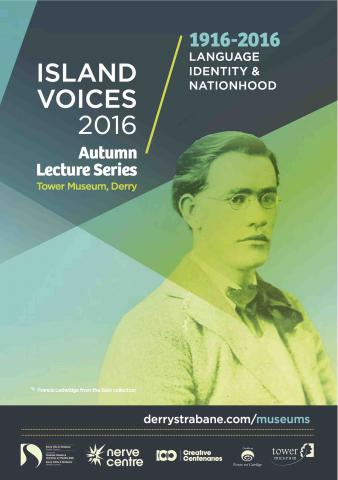 Returning to the Tower Museum in the city, three guest speakers will each explore the social, cultural and political landscape of Ireland in 1916. This year’s theme concentrates on the complex and sometimes contested relationships which exist between language, identity and nationhood, offering different perspectives on our shared history.

The lectures have been organised to offer audiences the opportunity to revisit an important period in history to reveal the ways in which landmark historical events such as the Easter Rising and the Battle of the Somme have shaped our understanding of ourselves and each other.

On Thursday 22 September, Dave Duggan will discuss the legacy of Irish soldier poet Francis Ledwidge in his talk, 'Shovel, bayonet and pen: Digging for nationhood with Francis Ledwidge'.

Delivered in English with some Irish, dramatist and novelist Dave Duggan considers how Ledwidge, navvy, soldier and poet, turned the sods of his own identity, tilling fields of labour, war and language into a complex nationality that continues to resonate today, a century later.

Her presentation will explore the idea of heritage and allegiance by looking at the contribution of commemoration to identity building and how, in recent years, this has been renegotiated. Seminal moments in our past have been reinterpreted, deconstructed and represented, with both the First World War and the Easter Rising, now being presented as aspects of our shared history.

Aindrias Ó Cathasaigh delivers the final talk in the series on Thursday 24 November when he discusses 'The Irish Language and the Rising'.

The Irish language movement was one of the many strands which came together to take on the British empire in 1916. Many of those who led and participated in the Easter Rising had come through the language movement.

As well as nourishing a worldview which went far beyond the limited home rule held out to Ireland, the movement gave practical organisational experience which proved invaluable in the run- up to the rising and its aftermath.

An education strand to the programme will also see Creative Centenaries offering digital design workshops to irish medium schools across the district, helping young people to explore 1916 through digital approaches.

The Island Voices programme of talks are free to attend and lunch is provided. To book a place for any of the talks or for more information on the education programme, contact the Tower Museum. Tel: 028 7137 2411 or email: tower@derrystrabane.com