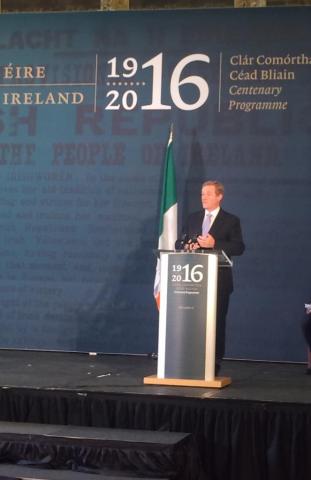 Taoiseach Enda Kenny was on hand last week to unveil a programme of over 1,800 events that will take place across the country next year to mark the centenary of the Easter Rising.

The County Plans follow over 80 public meetings held around the country throughout 2015 where local people were encouraged to participate and advise what they would like to see during the centenary year.

Tánaiste Joan Burton joined the Taoiseach at the Irish Museum of Modern Art to launch the plans from 31 local authorities.

A week-long celebration of revolutionary Eamon Ceannt, one of the seven signatories of the Proclamation, will take place in Galway, followed by an international parade.

In Cavan, groups will work together to design a quilt depicting the role of women in Irish history, which will be exhibited throughout the county during 2016.

Meanwhile, Roscommon will host Revolutionaries In Their Own Right – Women and Revolution, a project which looks at the role of women in the Rising.

While launching the plans, Taoiseach Enda Kenny said the main theme for events would be inclusivity.

'I am delighted that the local authorities have reached into the heart of the communities you represent to ensure that next year will be a truly inclusive one – where all citizens’ views can be listened to and respected,' he said.

'The story and events of 1916 belongs to all of us regardless of political or family background, or personal interpretation of our modern history.'